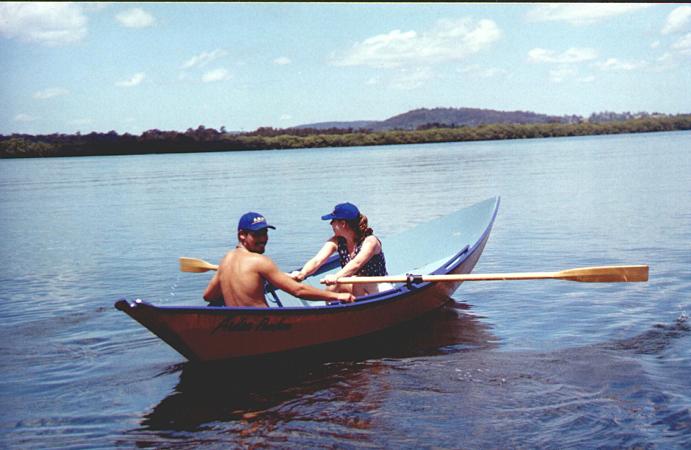 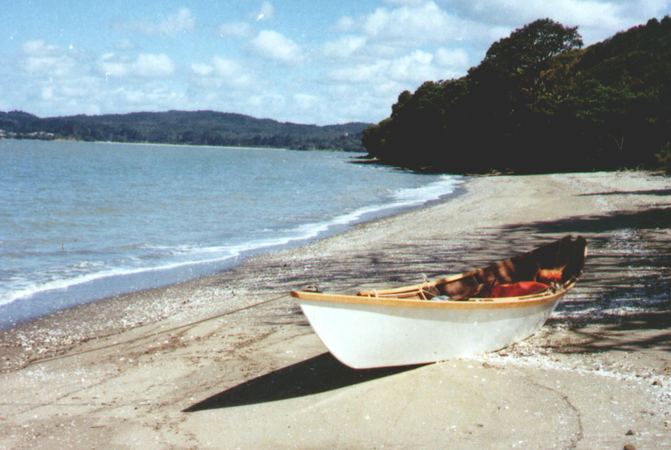 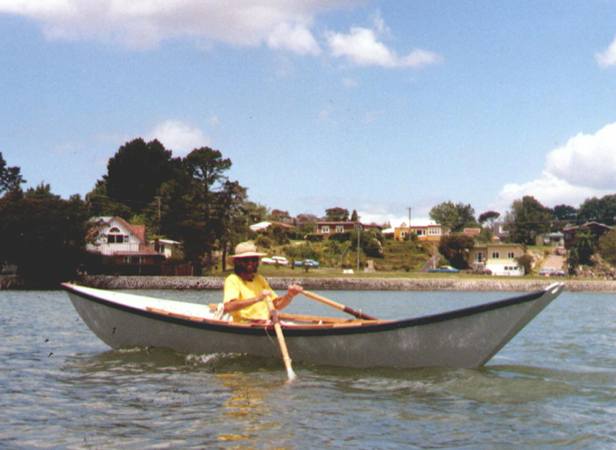 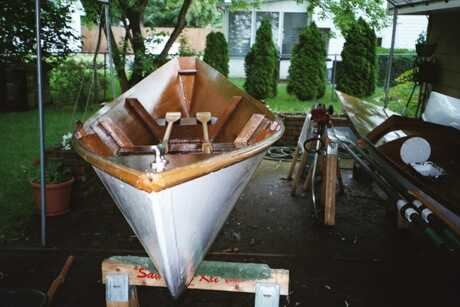 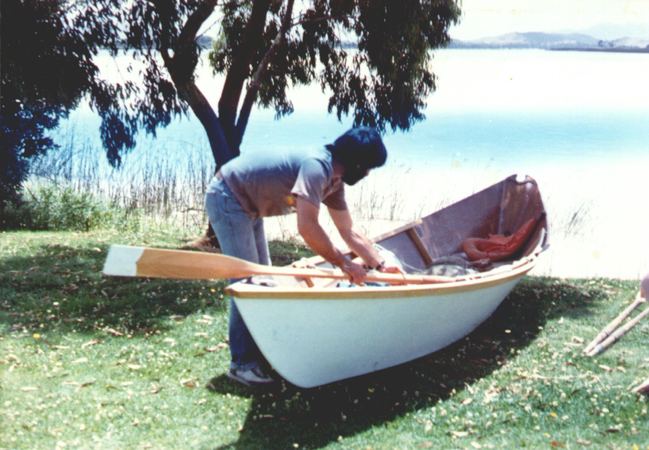 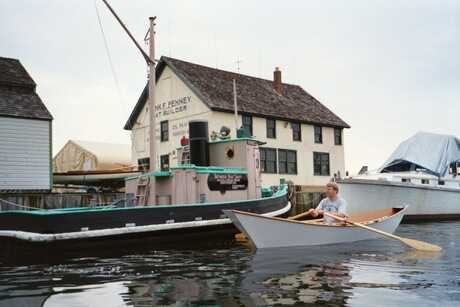 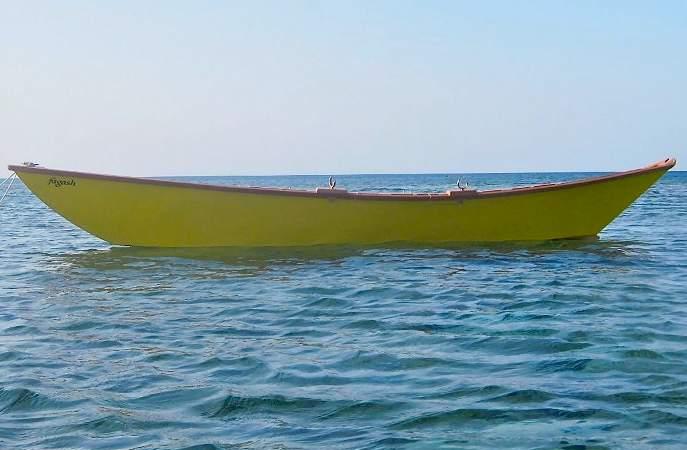 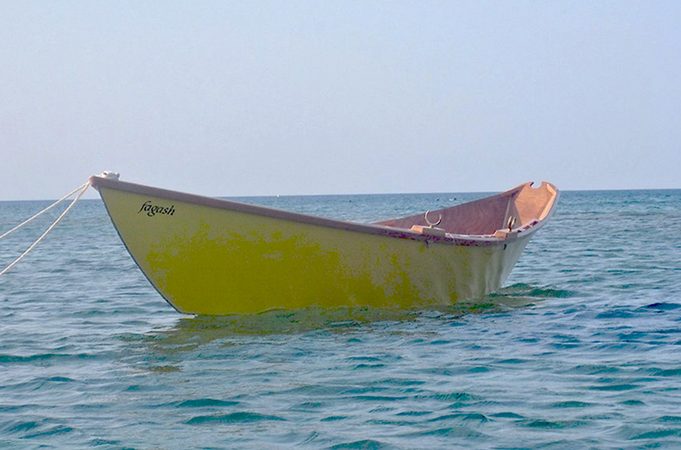 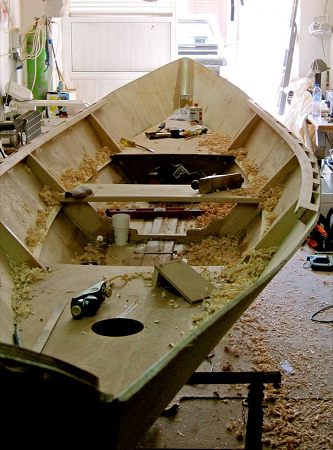 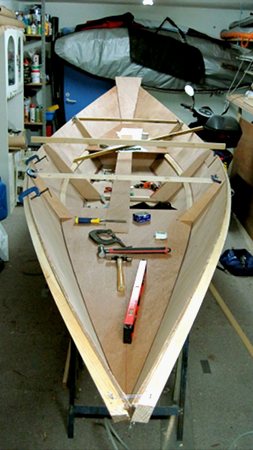 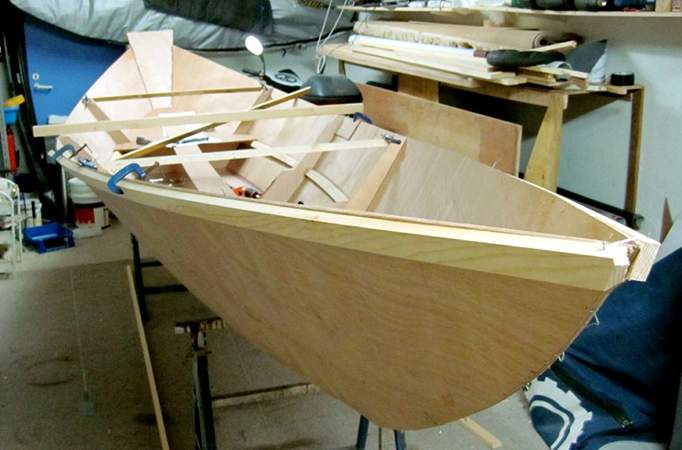 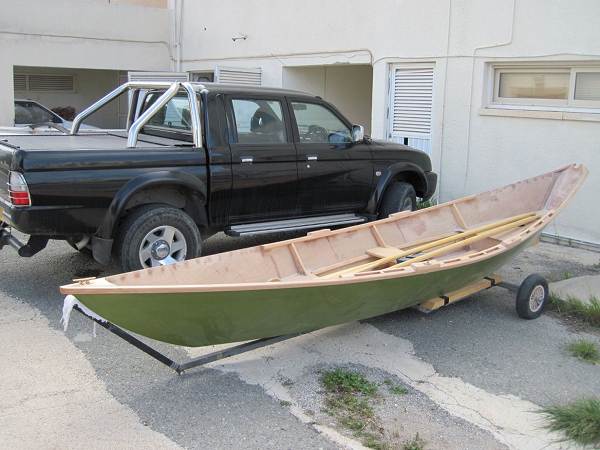 It suddenly dawned on me one bright October morn that barring miracles or extraordinary effort there would be no Christmas cruise that year. I'm not sure when the idea first began but it wasn't long before the notion of a boat for ‘cruising under oars’ was rapidly becoming a reality. One of the considerations of course was time, the way to build boats really quickly is not to work like lightning, it is to build boats that are very simple and relatively small!

The first job was to decide on a boat. I had reservations about the shapes of some craft, the construction method or costs of others and concerns about the seaworthiness of most so design it yourself seemed to be the order of the day.

What eventuated was a plywood dory with a tombstone transom (it's not really a dory otherwise); a nicely curved stem to force some shape into the sides forward, a strong sheer kicking up aft to a high stern (thoughts of going surfing) with the maximum beam (further aft than is traditional to make the boat run straight in heavy following seas). Added to this is a big skeg for directional stability and to balance the windage, buoyancy tanks under the seats and a sculling notch in the transom and the boat is looking very much the part.

After the usual laborious arithmetic and fiddling with moments and volumes, the sketched ideas were turned into lines drawings and the drawings into a 1/10 scale model.

For speed of building, the dory was built by ‘stitch and tape’ techniques which eliminated most of the framing and all of the building jig. Basically flat panels are cut to shape and then joined along the edges giving the desired shape, some minimal framing carried the loads from the rowlocks and the seats and the seats formed buoyancy tanks in case of a major disaster.

Predetermining the shape of the panels was the difficult part. In this case I built the model over solid station frames and when finished wrapped light card around the boat, traced around the edges, cut the shape out and transferred it to graph paper making scaling up an easy Job.

Building the boat did not take long, a few hours here and there over a couple of weeks saw her ready to paint and the total cost of about $250 did not hurt the pocket too badly.

I can carry the boat on my own, essential for a boat that will be used almost entirely single handed – she weighed in at 42kg dry.

She rows extremely easily, better loaded than light because of the heavily rockered bottom. It cannot be driven past hull speed even by a very strong person but is wonderful for eating up the miles at a moderate pace. I've covered 3½ measured statute miles in an hour without busting my boiler and have travelled 25 miles in six hours with tidal assistance.The light weight and the narrow waterline beam combine to make the boat feel a little tender when unloaded, especially when the rower is unused to the wiles of dories. I carry about 30 litres of water in plastic jerry cans which improves her stability and also helps the boat carry its way.

Like most fine ended boats she is pretty sensitive to trim, if I find she needs to be a little bow down to stop her blowing around broadside on while I try to row her to windward, or conversely, stern down for downwind I have a ten litre plastic container of water on a light line and toss it to the appropriate end of the boat The line is so I can retrieve it without moving from my secure seat amidships.

A full load of camping gear and provisions makes things easy, the boat rides better down on her lines a little, and she is much more stable. Rough weather in one of these is exhilarating. The motion of the boat is very easy, especially in a beam sea when the rowers position right on the centre of motion about which the boat pitches so the oarsman doesn't get thrown about in a seaway. It is amazing to watch as great foaming crests disappear under the gunwale without any fuss.

The Light Dory has proven to be not only great for recreational rowing but ideal for its intended job, a long trip under oars.