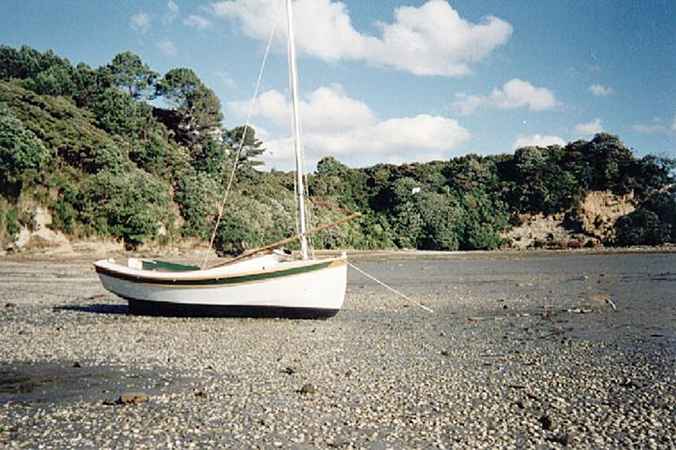 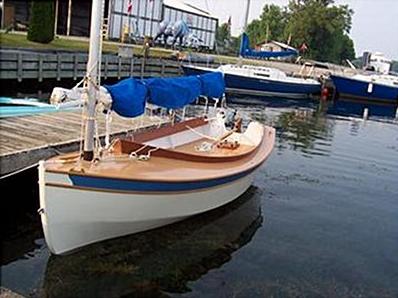 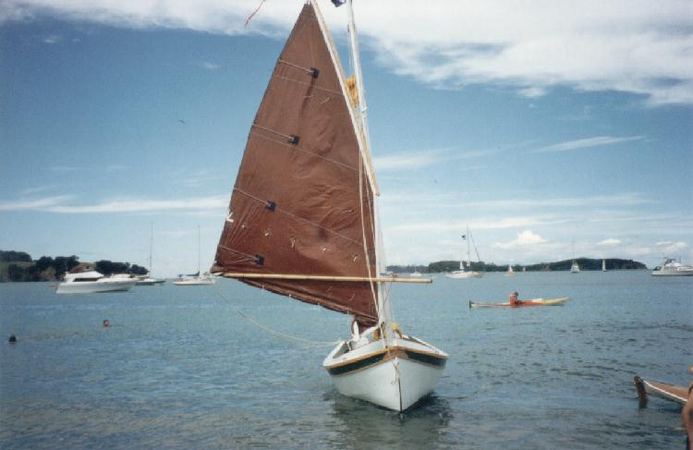 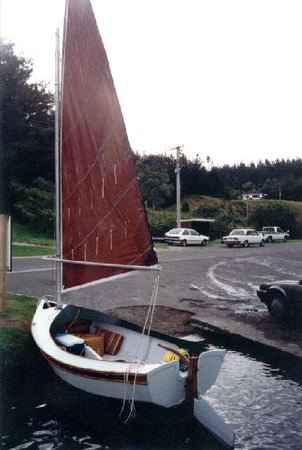 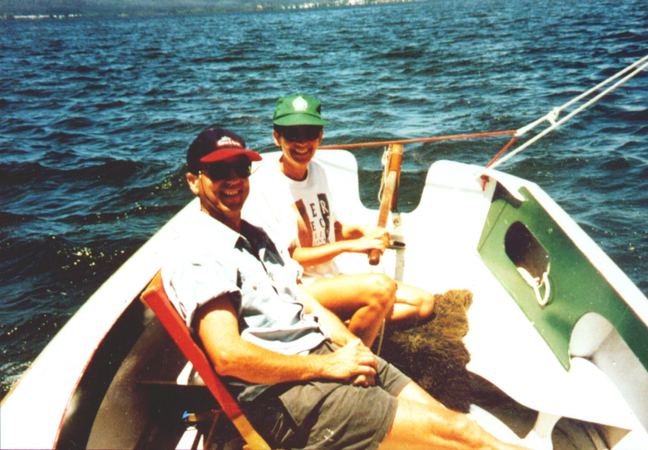 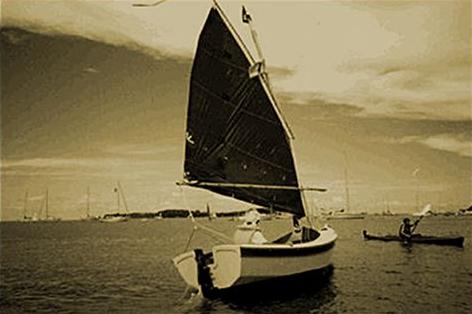 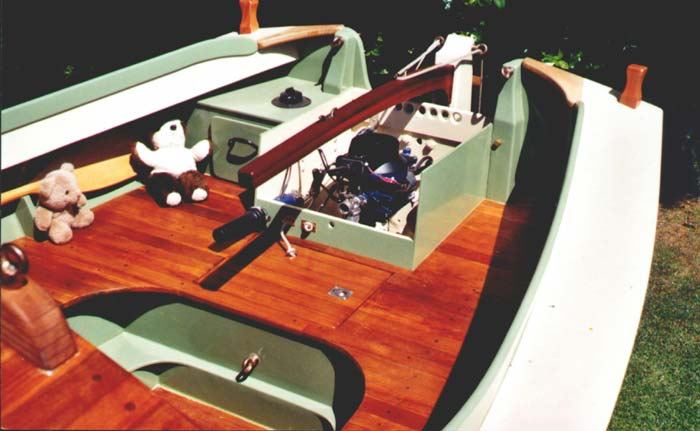 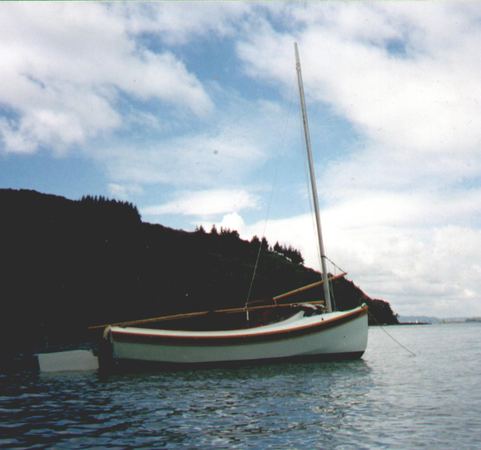 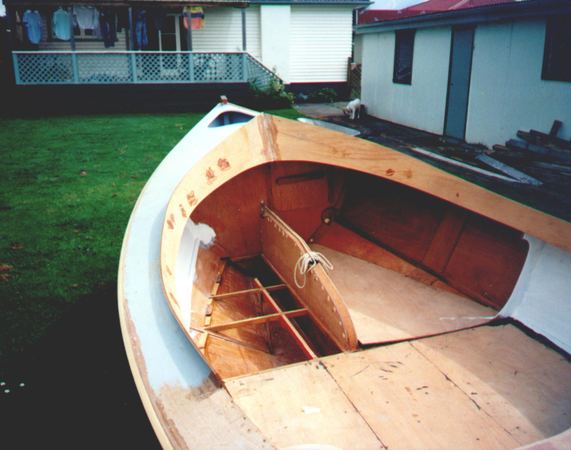 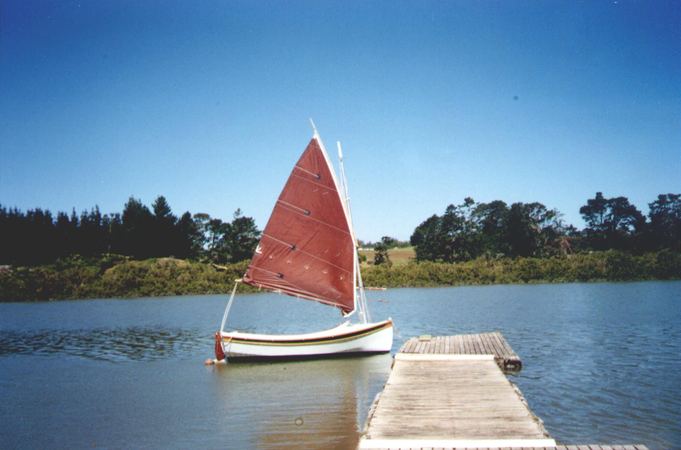 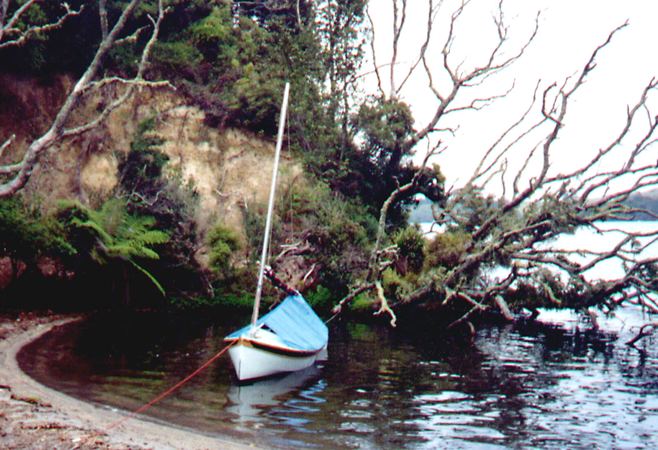 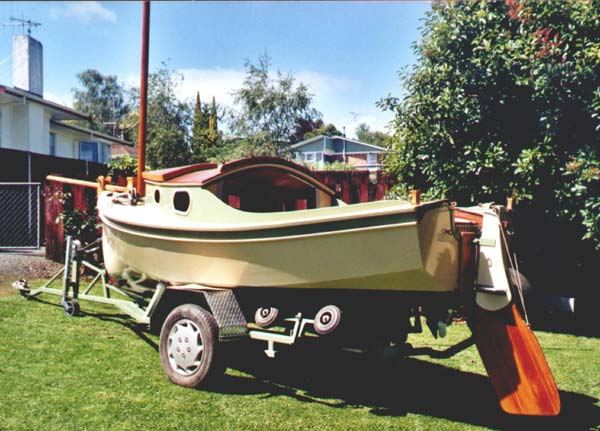 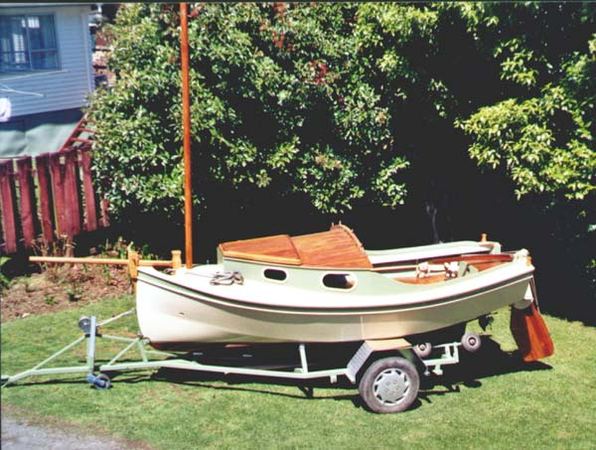 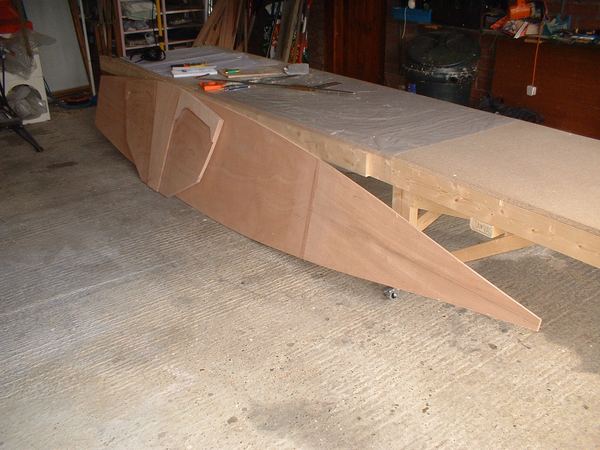 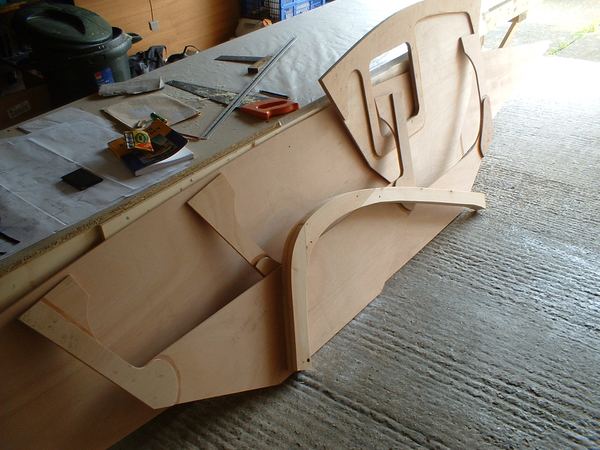 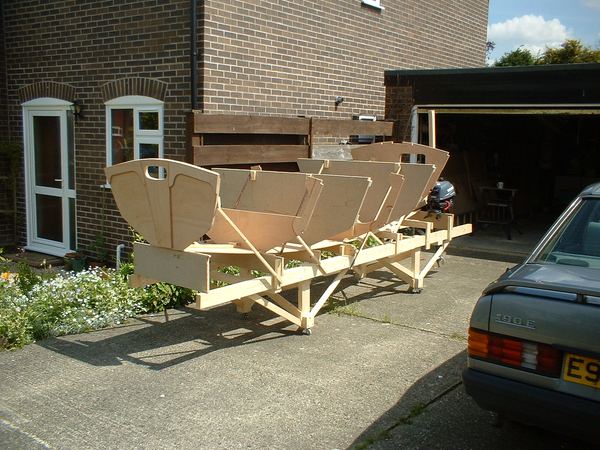 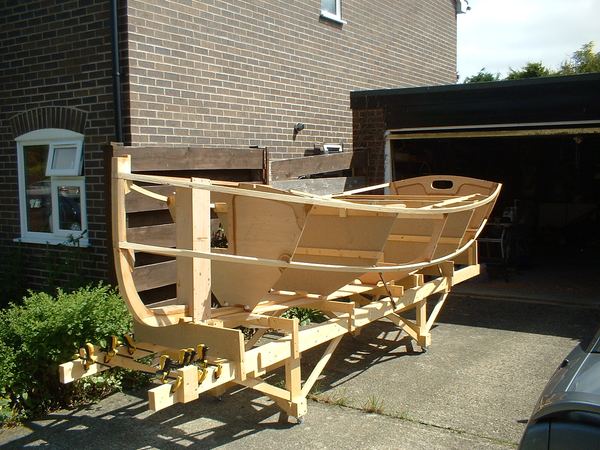 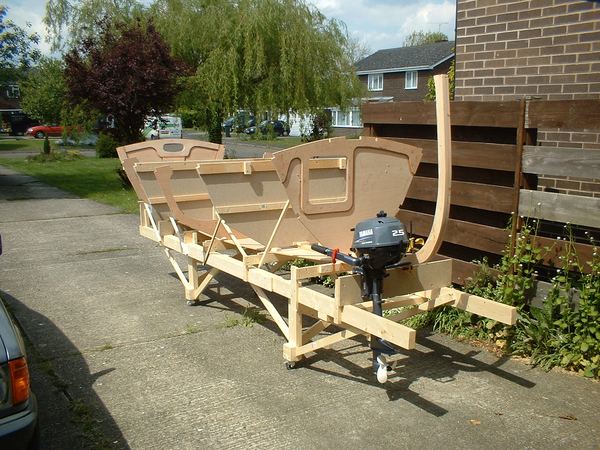 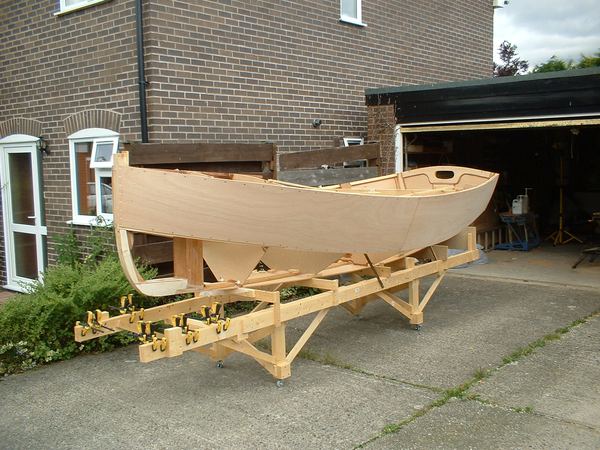 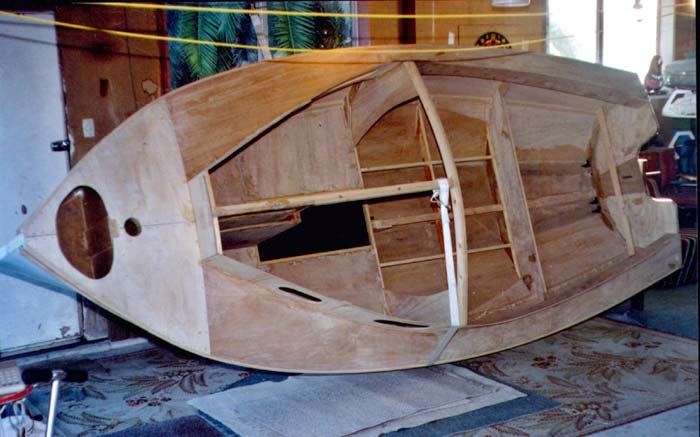 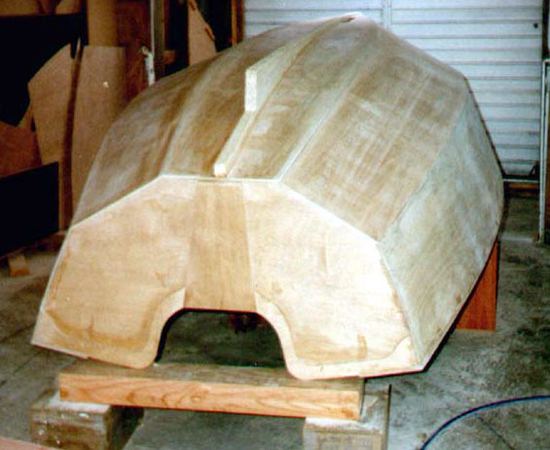 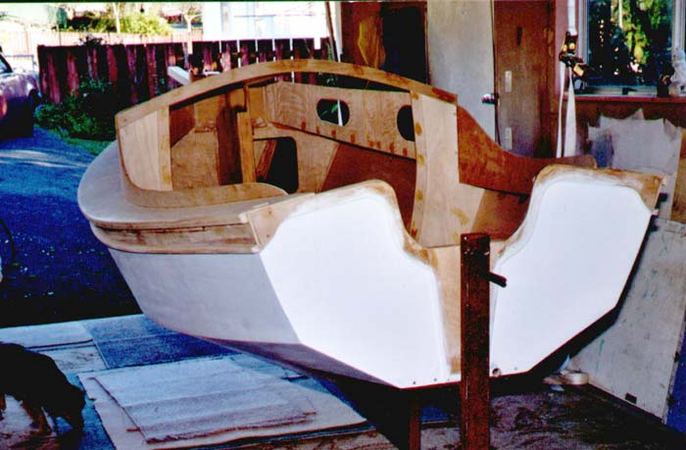 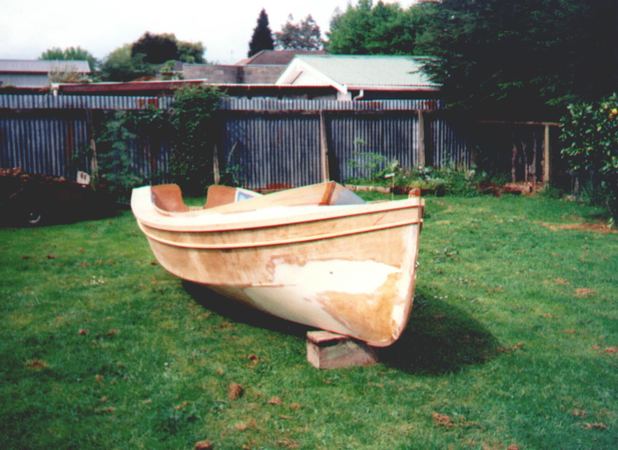 This is a boat that not only thinks its a twenty footer but manages to convince most other people that she's much bigger than she really is as well. With her wide side decks, ample freeboard and high coamings Houdini is a dry boat, her sharp underwater sections make her stable and much faster than many would expect, while the amount of room is just amazing! One could happily accommodate six or seven adults for an afternoon sail, or four big kids plus a mountain of camping gear for a week away.

I had planned on using the sports rowing boat Seagull as my getaway boat over the Christmas period but when out on the river with a group of the Traditional Small Craft Society members I was bullied (he offered me money, an unfair tactic) into selling her to a guy who had just rowed the eight miles up and back in a little pram dinghy. This left me in mid November with the prospect of no boat for the summer!

That was Saturday, by Sunday I'd done a stock take of the materials on hand, checked the space in the work shop, measured my garden trailer, counted how many days until the two important T.S.C.S. regattas at the end of January and designed the boat to suit.

Other considerations were that I wanted to be able to tent her and sleep two on board, she could not be too big for wife Jan or 12 year old daughter Sarina to sail single handed but she still had to accommodate two adults, a twelve and a three in enough comfort to prevent friction between the junior members of the crew, and still be seaworthy enough to cope with my coastal cruising ambitions. As a cruiser she needed plenty of storage space, she needed to be dry and comfortable and also had to be suited to my three year old sons need to scramble around.

So Houdini ended up just over thirteen feet long but a buxom 5ft 1Oin wide. She has a single standing lugsail on bamboo spars (the budget was a major consideration!) and a self draining floor which runs from the mast step back to the stem sheets providing a seven foot (2.1 metre) long sleeping space on each side of the centrecase, a big locker under the foredeck and more storage under the sternsheets (the raised seats aft).

Houdini has a high power to weight ratio which makes her fast and nimble, exciting to sail while the wide beam and high freeboard keep her safe if some skippers enthusiasm overtakes caution. The building started off well, she took three weeks of evenings from when I started that Sunday afternoon to get the boat planked up, centreboard case and anchor well in, seats and self draining floor framed and fitted. She presented no problems in the building and I was able to correct the plans as I went.

My Father died that February, and family considerations shelved Houdini for a while, then a job came along that I could not turn down but which required us to move house down to Rotorua, all of a sudden there were a lot of jobs with urgent tags on them so once again Houdini had to wait.

The wait was worthwhile though, she got finished in Gordon Newcombes (Plywood and Marine Supplies, the best plywood shop around) showroom, Derek Hickman made me an excellent sail, and she was eventually launched into the fresh water of Lake Rotoiti.

There is nothing unorthodox in the structure and any ordinary handyman (handyperson feels a very clumsy word to me, so sorry ladies, please feel included should I slip up again) could build one of these in short order. I enjoyed the building, the many short stints out in the workshop away from the stresses of work and very helpful in relaxing a person who has to be an ‘up and attem’ salesman no matter how I feel on the day.

In any new boat there is a little of trying something new, Houdini has a lot of this, derived from the American Cape Cod Catboats to a certain degree I wanted to avoid their notoriously difficult downwind handling and tendency to be heavy on the helm so situated the centreboard well forward with a very large skeg and an oversize rudder aft. This had the added benefit of freeing up much of the space in the cockpit improving the accommodation no end and oddly enough the underwater foils being far apart seems to contribute to the boats directional stability which is phenomenal for such a short, fat little boat.

With the big locker under the foredeck sealed off behind a close fitting hatch, and a considerable amount of air tankage under the floor and in the sternsheets she will float very high in the unlikely event of ‘canning her out’. But I would warn that it takes a long time to bail such a large volume boat. The dinghy bailer in the bottom would eventually have her dry but it would take a while.

The sprit boomed standing lugsail rig is a favourite of mine, giving a lot of area for not much money and short spars that stow within the boat when on the trailer. These rigs are close winded, easy to handle, have a low centre of effort and are incredibly powerful reaching and running.

She'd look very cute as a gaff sloop, and would, I have no doubt have a very wide appeal but my feeling is that the extra windage, weight aloft and cost would not be worth the improvement in appearance. Perhaps when I get the 5.3 m versions plans done the gaffer will be a more practical alternative.

Note that this kit does not contain any of the wooden parts. Budget £1,000 for the wood.