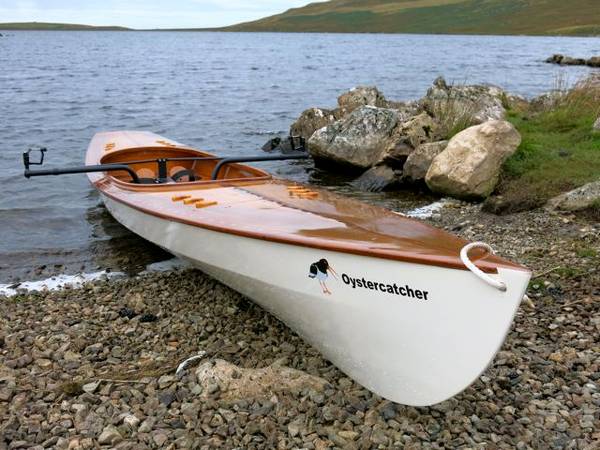 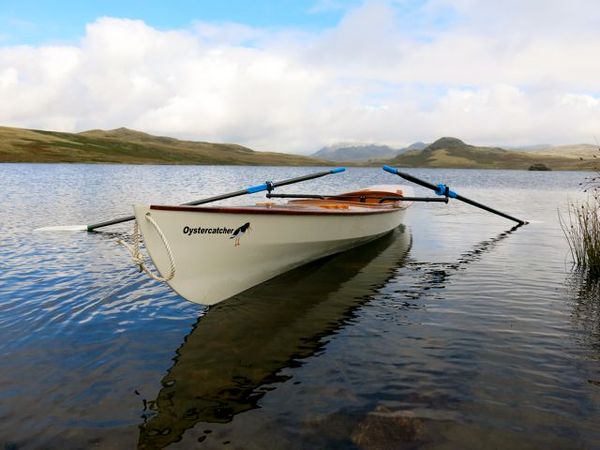 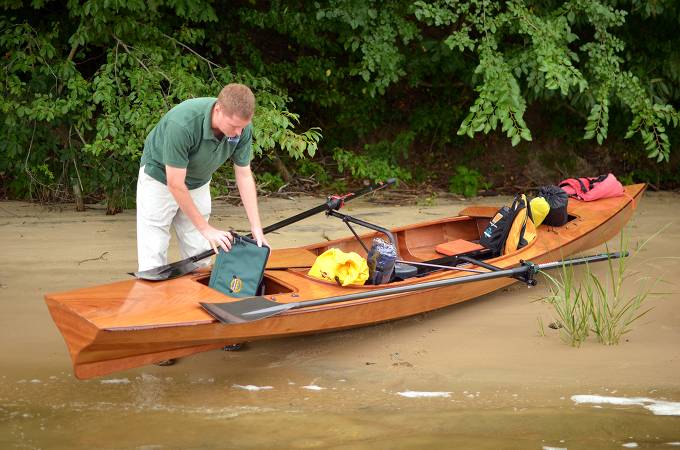 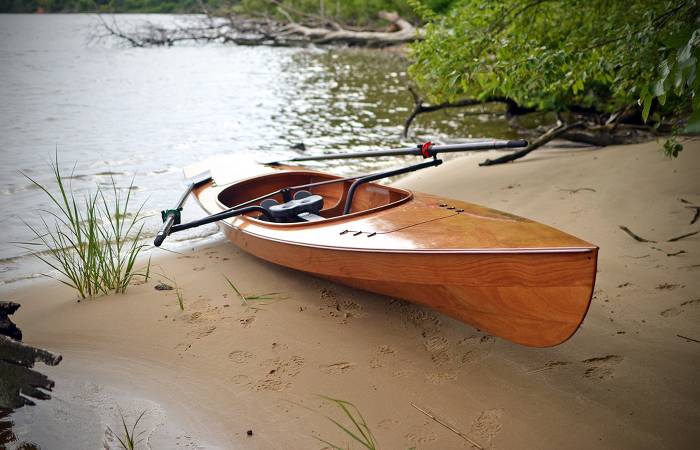 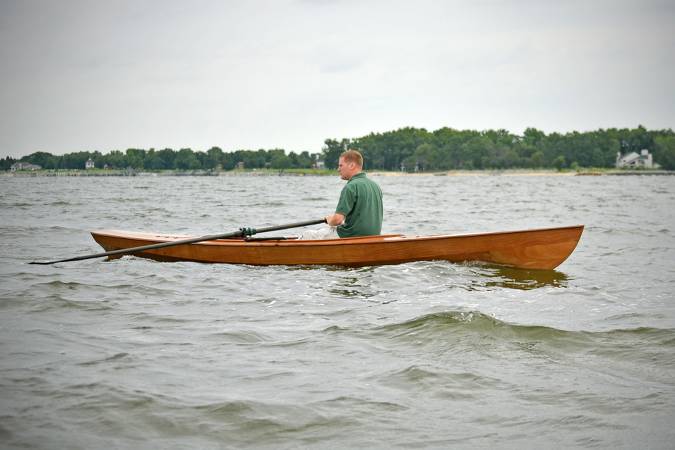 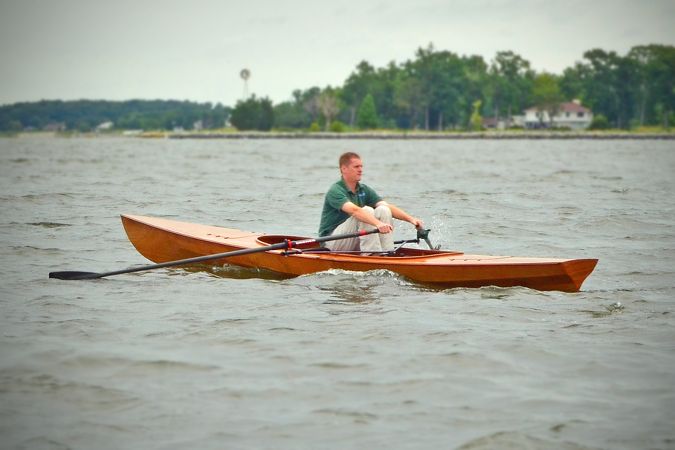 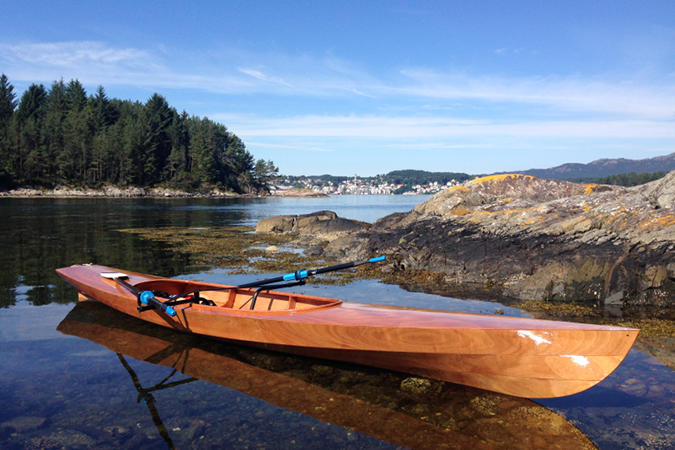 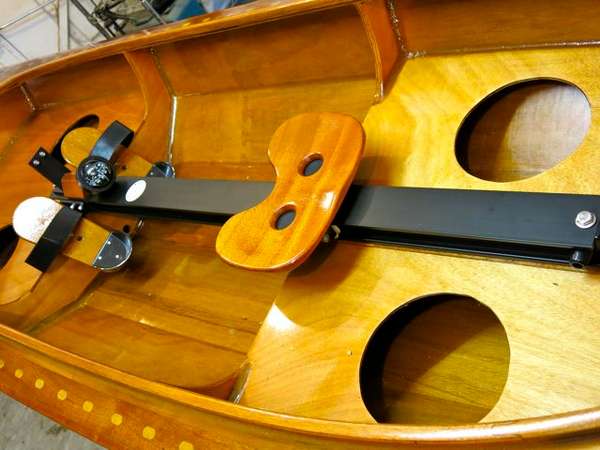 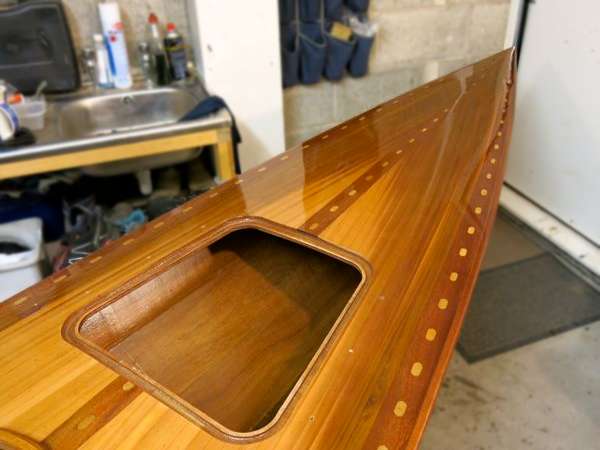 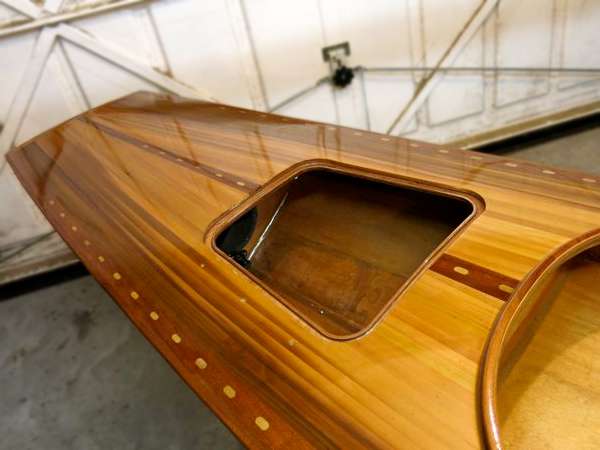 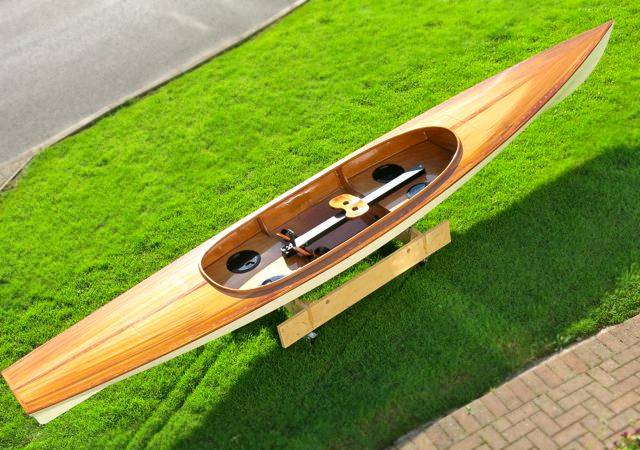 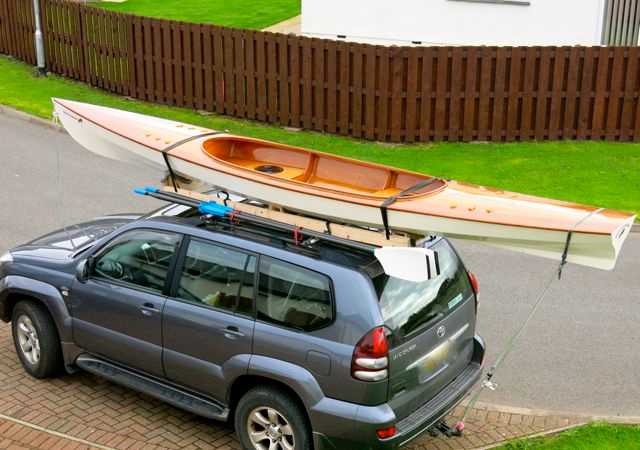 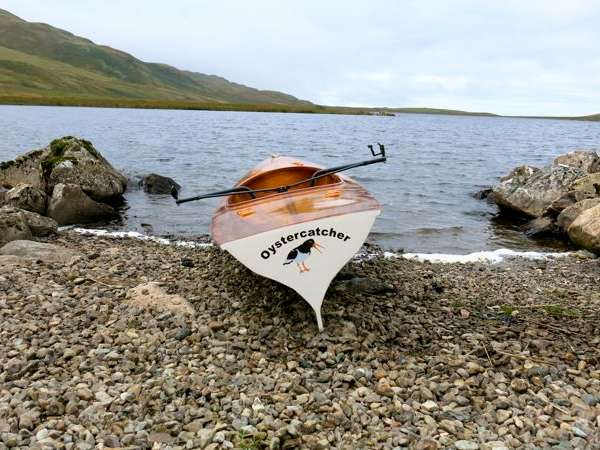 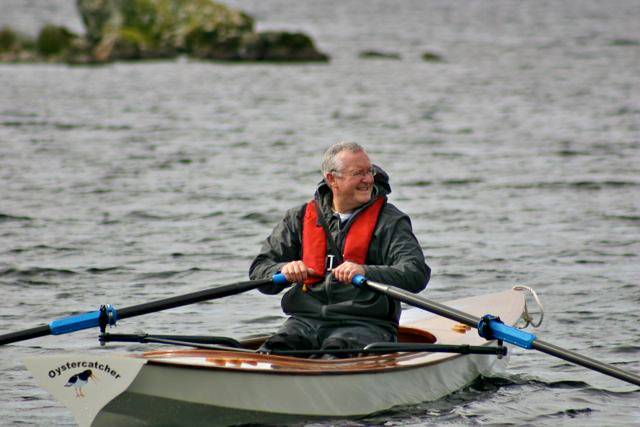 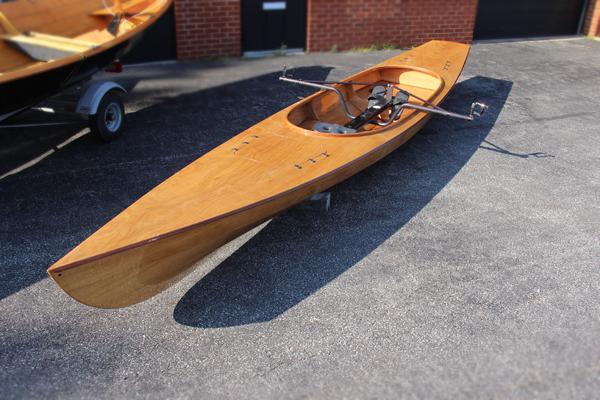 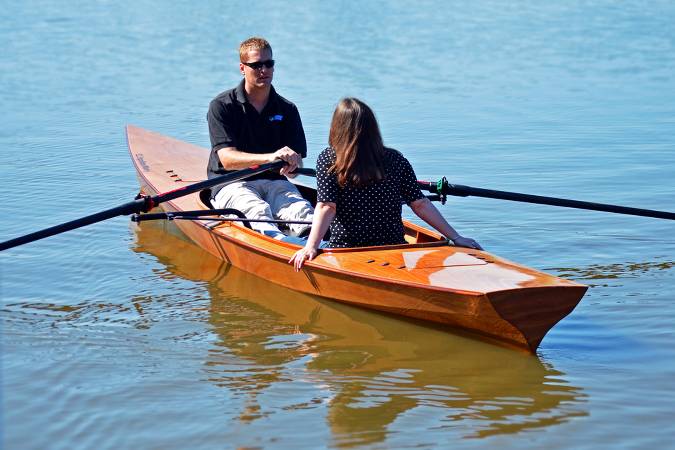 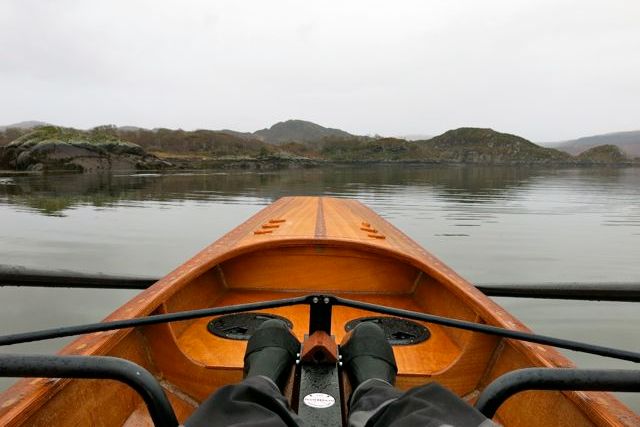 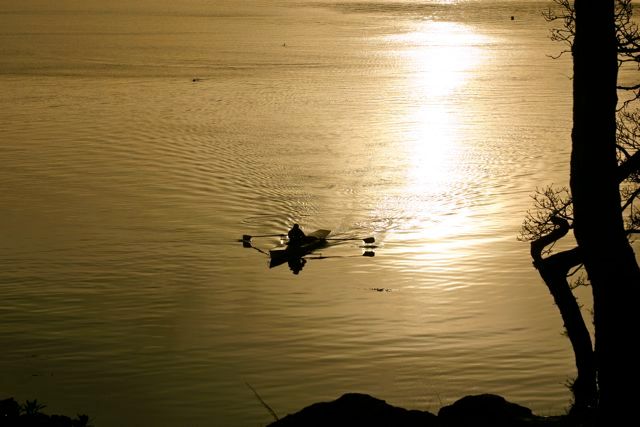 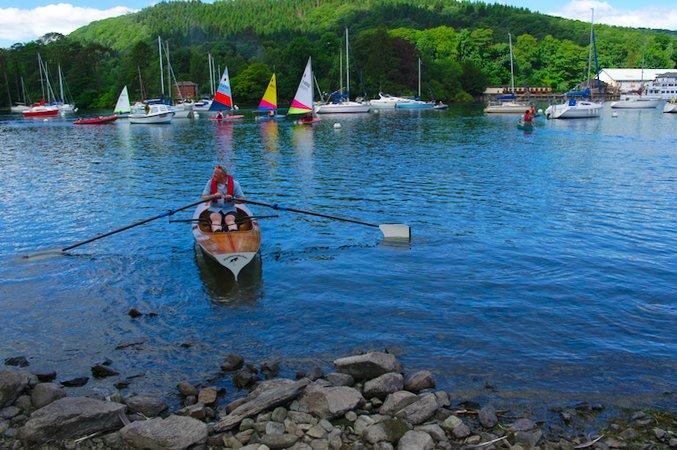 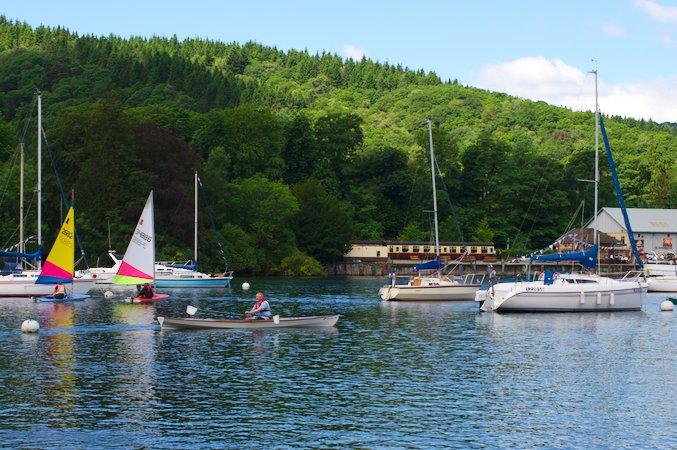 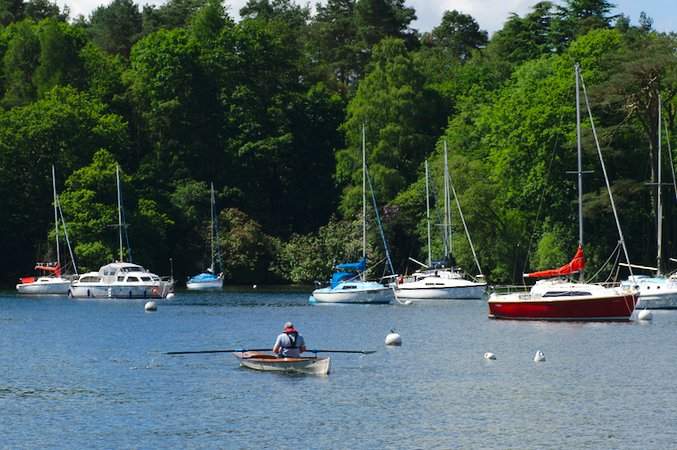 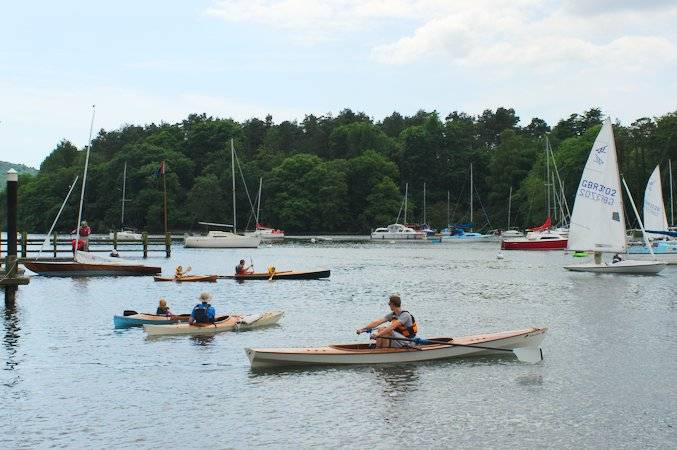 This fast, shapely wherry is intended for serious sliding-seat rowers who are looking for open-water ability and enough payload for camp-cruising.

A wherry is a pulling boat that falls somewhere between the needle-thin racing shells and wide rowing boats. Wherries are the ride of choice for rowers who want speed but don't want to confine themselves to the placid rivers that are the natural haunt of a racing shell. The word ‘wherry’ was used as early as the 1500's to describe the swift water taxis in use on the River Thames. The basic wherry shape – a narrow waterline, flaring sharply above the water to gain stability as the boat heels or is loaded – has not been improved upon in 150 years.

The seaworthy Expedition Wherry came about as a solution for fitness-oriented rowers who want to go out in cold or rough water, perhaps with camping gear. Designer John C. Harris, who has been designing, building and enjoying sliding seat boats for 27 years, spent a lot of time tinkering with the hull lines to find the best compromise between speed, payload and stability. ‘As soon as you're not competing with the racing shells, the design of a rowing boat becomes much more multi-dimensional’, Harris says. ‘Some of the characteristics that make a boat ideal for sprinting in flat water are completely at odds with performance in waves. I added a lot of rocker, which definitely gives the boat a nimble feel in waves and as an added bonus keeps the wetted surface from creeping up on you’.

Harris is especially proud of the bow shape. ‘I'm working within the limitations of a hull design that's really easy to build from a kit. But I think I got the distribution of volume in the forward third of the boat just right. It's quite fine down at the waterline, for speed, but with a pronounced shoulder up near the deck to help the bow lift over waves. It's subtle but you can see that feature working in the video footage’.

Most of the boat is decked in, with only a small sump area beneath the oarsman's heels to gather bilge water. An optional Elvstrom-type bailer mounted there can dispose of any water that gathers there. There are four separate watertight compartments, all accessible through hatches for gear storage. The boat has enough stability and the compartments provide enough buoyancy that it's possible to climb back into the cockpit after a capsize, bail out and continue on your way.

The official maximum payload is 423 pounds. Thus, a 200-pound oarsman could carry the equivalent of three infantry-sized backpacks worth of camping gear – but of course, the lighter you pack, the faster the boat goes. The standard flush deck hatches are large enough for tents, sleeping bags and kitchen sinks of modest size.

While the boat is too short for tandem rowers, it can take a passenger. Just loosen two wing nuts, move the sliding seat forward about eight inches and you have a setup that's perfect for a picnic row with your significant other, a rowing coach, your children, a dog, or whatever.

As a single, the Expedition Wherry is fast. John Harris used the boat for four months during sea trials, accumulating GPS data while studying different stroke rates. ‘At a gentle cruising pace, about 50 percent pressure and 22-23 strokes per minute, you're doing 4.5 knots, or just over five miles per hour. The equivalent of an easy jogging pace on shore. Even with a couple of long breaks, you could cover 30 miles in a day, no problem’. Pick up the pace and you can sprint at 6.5 knots, Harris says. ‘The boat is topping out for me around 6.5 knots, or 7½ mph, but I'm not much of an athlete compared to some rowers. A strong oarsman could keep that up for longer than I could!’

Comparisons to CLC's Wherry design are inevitable, and warranted. The massively popular Wherry has beguiled hundreds of rowers over the years. Compared to the Expedition Wherry, the Wherry is probably a little faster in smooth water. But with less freeboard and no deck, it has a much smaller payload (325 pounds) and is less suited to open water. ‘Everything's a compromise’, says Harris. ‘If you're mostly rowing in protected water, and with light payloads, the Wherry will prove faster. The Expedition Wherry is a bit more of a rugged backwoods boat, though, with loads of gear storage and the safety of the decking’.

The Expedition Wherry is a multi-chined plywood boat, with a six-panel hull reinforced by six bulkheads. The hull is mostly 4 mm Okoume plywood, with fibreglass applied both inside and out. The computer-cut kit is intricately designed and highly evolved to suit fast and easy construction, including by first-time builders. Hull panels are snapped together with puzzle joints and all of the holes for the temporary wire stitches have been drilled in advance.

On our forum you can read a detailed build log (with lots of photos) of the first Expedition Wherry to be built in the UK, customised with a gorgeous cedar-strip deck.

Overall I am very pleased with the project, the boat was easy to build and looks fantastic. You get a fantastic craft for a relatively small cost.

This boat is designed for use with a rowing frame, which is not included in the kit.

Plans and manual (not required by kit purchasers)

The plans contain sufficient information to build the boat from scratch rather than a kit. They include full size drawings for every part.

This is intended for pre-build study or to help with the decision to purchase. This is the comprehensive manual that accompanies the kit; reading it will help you decide whether or not you can build the boat. It describes all of the techniques that will be used during the build and also a step by step guide to construction. It contains a photograph or diagram of every step.

If, later, you decide to purchase the kit the cost of this will be deducted from the kit price.

The manual does not contain the cutting instructions so it is not possible to build the boat from scratch using only this.

The construction manual for the boat is also available as a PDF download. After credit card authorisation a download link will be sent to the email address put on the order form.

These study plans are intended to give you an overview of the construction of the boat. They are in PDF format that can be viewed using Adobe Reader. There are two pages and they measure 279 × 216 mm (11″ × 8½″). They can be printed for carrying around.

After credit card authorisation the plans will be sent to the email address put on the order form.

When you have studied the plans, your next step might be to order the printed instruction manual, which will walk you through the project step-by-step. 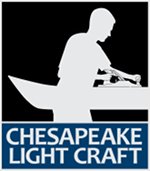 This boat is also available ready-built. 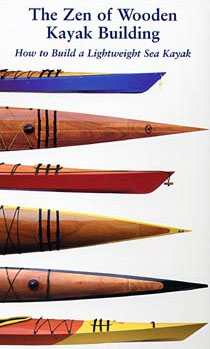 How to build a lightweight boat (not just a kayak).

A drop-in sliding-seat rowing frame for sculling boats and canoes. 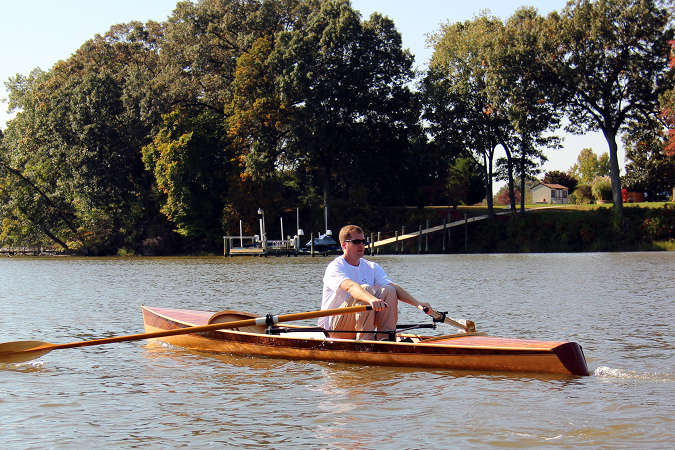 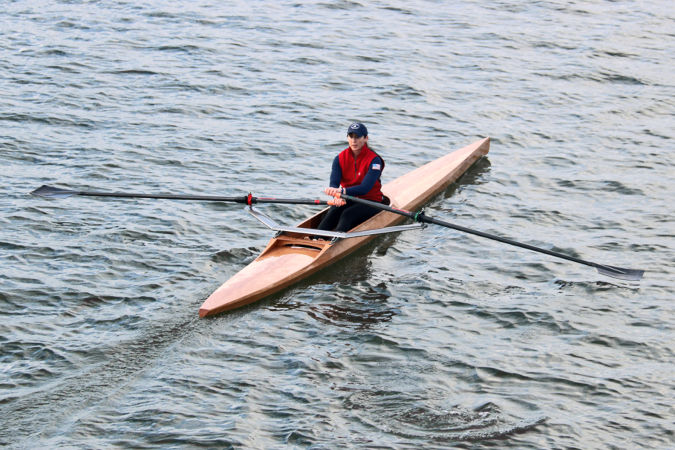